I have heard many stories from people’s potty training efforts and also have been informed on many occasion that boys are always harder to teach. So I have waited until now, he is 2 and a half and is showing some very encouraging signs:

So last night I put the Pourty in a convenient spot in the lounge, on a towel of course and pinned the reward chart right by the side of it. The thought is that he can see his progress whilst he sits on the Pourty and everything is all close the stairs where the supplies are being held. Supplies are carpet cleaner, sponges, wipes, talc (this helps me to see when he has wee’d a bit), many many pants, socks and tops and a little bin for all the wipes I will accumulate. Stickers are kept out of reach as he will just take them all when he wants otherwise. So I think we are ready to rock and roll…

It wasn’t the greatest of starts, I have to admit, I think I was a bit naive as to how stressful this would be. I didn’t let Noah see this though, I kept up the happy tone and the excited voice to encourage him into using the potty, But by midday he had not used it once and there had been around 8 sets of pants in the wash! Everytime I asked him if he wanted to use the Pourty he would say “No” in true classic Noah style. Do you want a wee wee Noah? “No!” Hmmm… I was beginning to feel like maybe I was trying all of this too soon, the signs were there but he is really reluctant to get on that potty regardless of what I say to him.

So after a morning of wet pants, no warnings and no wee on the potty – just after midday he ran across the room shouting “sit potty” and he had done most of it in his nappy and I got his pants off quickly and sat him on the potty and he finished his wee. There was probably a teaspoon full but it was the starting point I needed and I was over the moon – we did a little dance, had a high five and he put his sticker on the chart.

10 minutes later he said the same thing, running towards the potty and doing a small bit in his pants first he finished up on the Pourty and he managed a whole week this time. It was his first big boy wee and we cleaned the Pourty, cleaned him up, changed his pants and covered his bum in talc and started again.

Over lunch in his high chair, he forgot what to do and wet himself. But it was fine, the Pourty was in the other room and he wasn’t really focussed, I understand that. I brushed it off, hopefully that his only real wee wasn’t going to be the last. He went through from 1pm until 2pm without anything, dry pants and no wee and no poop either – he normally poops at 9:30am in the morning and I was getting worried that he was too stressed to poop. He did a wee in his pants and was too late for the Pourty, but then I saw the “poop face” and sat him on the Pourty and he did a poop. He lept straight up and cried, as if to say “What is that?” but he got on with it, high fived me and got another sticker. 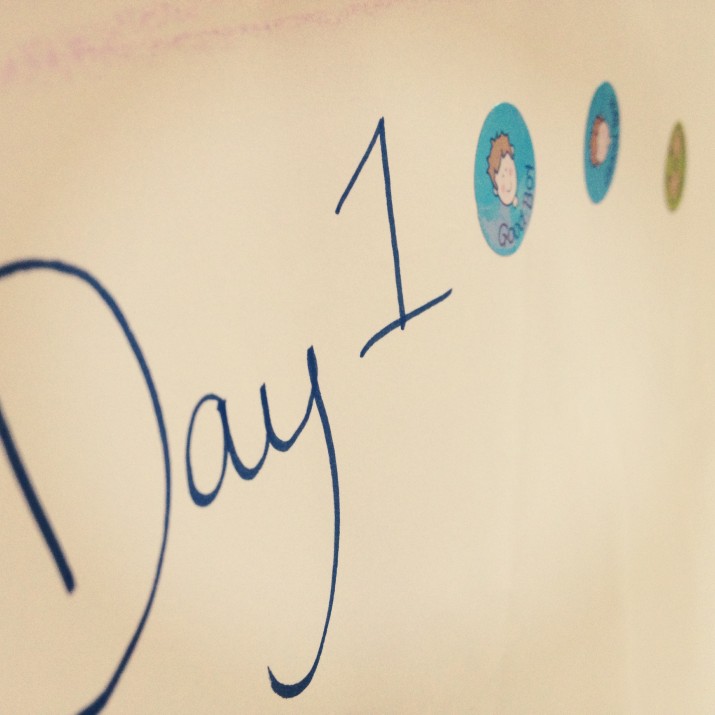 We had bathtime at 6pm, after bath we have naked time and then we put on night night pants (pull ups) as he does a lot of wee throughout the night at the moment. One thing I hadn’t contemplated was the fact that I have to spend the whole day watching him, his facial expressions and behaviour to work out when he wants the potty or not. Its been quite a busy day, especially as Isla is there to play and look after too. I do think I needed to have 4 pairs of hands and not just mine, but we are getting there.

Between 3pm and 6pm he did really well, a few accidents and a few more pairs of pants but we get the idea now. When I ask him where do we do wee wee’s – he answers “On potty”, so he knows where he needs to go, we just need to practice on the timing.

At the end of the day, we still only had 3 stickers, but he’s learning….

Noah and the Baby Doll!