At 14 weeks, Isla is still not sleeping all night, there is no pattern to her sleeping at all really. One night she sleeps until 1am, another it will be a 3am wake up call and some nights just a 6am – on occasion its 1am, 3am and 6am: I really don’t like those nights. I have no idea why, she has the same amount of milk, the same bedtime routine – which is bathtime at 7pm with Noah and get ready for bed, final bit of milk and sleep… so by 8pm she is in her cot.

The only thing I can think of is her weight, with Noah he slept all through the night from 8 weeks but he was a lot bigger than Isla. At 12 weeks Noah weighed over 12lb and Isla isn’t even 11lb yet at 14 weeks. So maybe when she gets a little bigger, she will be able to last longer at night time between feeds, I guess only time will tell and I will take her to weigh in this week too, so I can monitor her weight gain and see if it relates to her sleeping patterns. 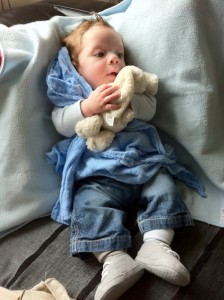 I was looking through photos of Noah tonight when he was 14 weeks old (to the right is Noah cuddling his little bunny, which he lost, boo) and I can really see how Isla and Noah look alike, its just like looking at twins looking back at these photos, I love it and he has some funny facial expressions, oh and some wacky hair going on too. Isla, where’s yours missie?

I still can’t believe how much smaller Isla is, she really is dinky, shoes do not fit her, she has only just started wearing her 0-3 month clothes, but she is really tall. Noah was quite short but obviously had a little more weight behind him at her age. Bless!

Isla got a new best friend this week, her little Lamaze Mermaid – she hasnt got a name as yet but I am sure she will get one soon enough. She has started to grab her, playing with her noisy fins and jingly star, she also gnaws on the teether. Its a great little doll and I got it through Babyhuddle. It’s really helping with Isla’s co-ordination and she is getting better and better at reaching out, grabbing and getting things in her mouth – the target. 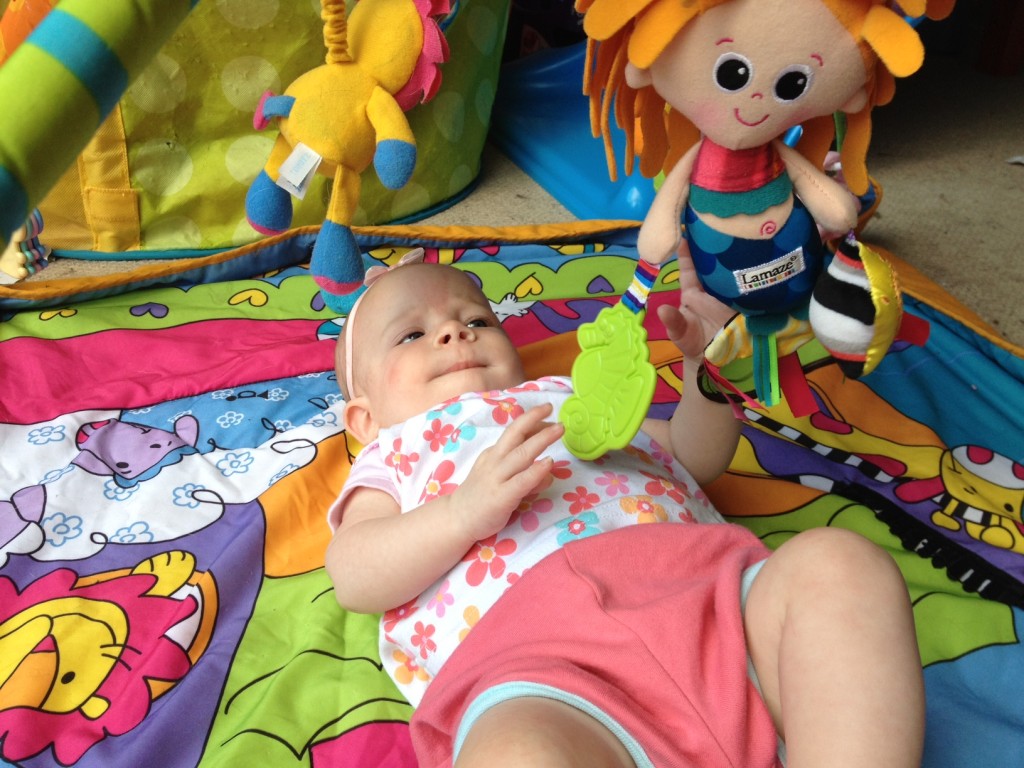 She was a little bit hot today, it was really yucky this afternoon, but we moved the garden around and tidied it all up and had our back doors open – for the first time in months (the trampoline blocked it before) and she was playing on her activity mat in the breeze for a long time with Mermaid, it was really cute. I love watching her rolling around on her mat, she does complete 360’s, she will be crawling before I know it. She might be small, but boy she is strong and clever! (Just like her Mumma)