Noah had his 2 1/2 year check up this morning and the health visitor made him do some things, which I’d never thought of before and I was gobsmacked. She drew a big circle and said who shall we draw and Noah shouted “Isla” at the top of his lungs, so the health visitor agreed and asked him to first draw Isla’s eyes and off he went dotting in the right place where eyes should be – she did have about 10 eyes but still he was in the right area. Next she asked him to draw some hair and off he went and drew her hair where hair should be, the same for the nose, mouth, arms and legs – I was amazed. I have never thought to ask him to do that before, I was so impressed and I can’t wait to get him to practice that every day now until his drawing gets better and more accurate.

Isn’t it just great to hear that your child is doing well and how fabulously they are coming along, not so happy when we got into the things that he isn’t doing so well in and then of course the words “I am referring you to a speech therapist” really got me worrying. I know I shouldn’t and its all normal, but it has.

No Mummy or Daddy wants to hear that kind of thing, but I totally appreciate why. Noah was saying “wanna go on trampoline with Daddy” and to me and Dean, we knew what he was saying completely – the health visitor didn’t have a clue until I told her. It shocked me. In my ears it’s all so very clear and I was even thinking how can she not understand that? It really was an eye opener into how eye boggled I am when it comes to my children and likewise for any parent, you live with them so you understand and compensate for things that strangers wouldn’t.

He had to do one of those jigsaws where you have pieces with handles and you have to put the right shapes into the right places and he did that without an issue, he has lots of those that he likes to do throughout the day. Then she gave him some mixed up jigsaw pieces that he had to piece together, he did it, with a a little encouragement but he did try to put the aeroplane half with a helicopter. We were told that it is normal and that we should try to give him some time everyday, even a few minutes where he has to do these kinds of things and really concentrate and think for himself. A tendency of mine is to talk to him about what he is doing, or help him with it, but I have to let him think for himself. So I will getting all the jigsaws out on Saturday for him to play with whilst Isla naps.

She got her book out and pointed to objects and Noah was great with the majority of them, but he wanted to look at the pages he wanted to – not the ones that he was asked to look at. Which is typical of him and the health visitor said its normal for a 2 and a half year old boy. He lacks in concentration too, he will start something and then play with something else and come back to the thing he started, he wants to do everything all at once and the health visitor did good at calming him down and getting him to focus on something. I was really impressed with how he reacted to her and how he got on with the little tasks that she had in her bag. My favourite one was the animals.

The health visitor had a bag of animals and she got them all out on to the table and she just said “I want to see what Noah does with them”, me and Dean knew exactly what he would do – line them up! Which he did, he proceeded to take all of the animals, one by one and place them in a line across the coffee table. It was the next bit that I was stunned at – the health visitor smiled and said well done to Noah and turned to me and Daddy and said can you see what he has done? We thought she meant about the lining up, so we said about how he does that with most toys, but she said no and to look closer at the animals. Sure enough, little Noah had paired all of the animals up in this line. So mummy horse was next to baby horse, the sheep, pig and cow in the same manner. We have never taught him that, nor have I ever thought about doing that with him before and he just naturally paired them. The health visitor explained that is what she was looking out for and that she is really happy that he did it, despite the fact he started to show off his little OCD “lining up” tendencies. (The health visitor said its fine that he lines things up, as long as it doesn’t become obsessive or if you move things he gets really upset about it – which he doesnt PHEW!) 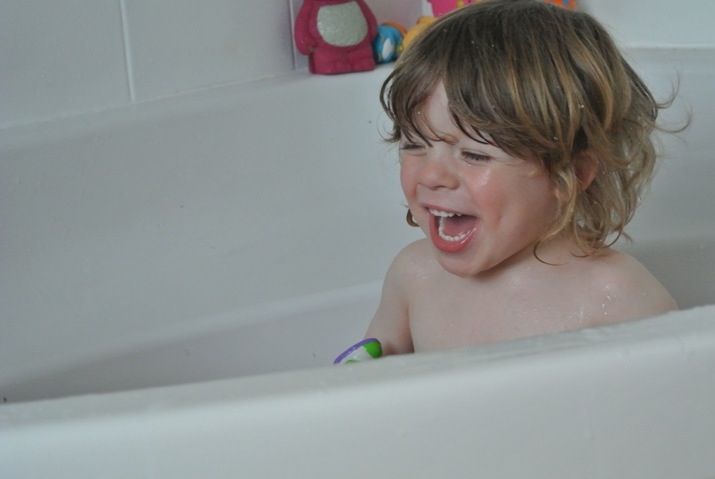 Over all she was really happy with Noah’s development, just not 100% about his speech. She said he a confident little chap, energetic and very very contented, which is great to see. Now we have a few things that we are going to slip into the routine, like drawing face parts onto people and jigsaws and I am really looking forward to learning some techniques to help with his speech from the speech therapist in a few weeks.

A day for bubbles…

A day for bubbles…