To say Snoopy has been unlucky with health issues, is an understatement. You may remember last year when we had to remove both his ear canals as he would get infections every few months. This year the problem we face is his sight. Our little pooch, whom I still think of as a puppy, is our family disabled dog.

Snoopy has cataracts in his eyes, both eyes have like a green grey cloud in them. We took him to our local vets who confirmed it was cataracts. I first noticed these just before last September when he had his last operation. We spoke to the vets around Christmas time as we wanted to find out if they could remove the cataracts. As the Winter drew in we noticed more and more that Snoopy couldn’t see where he was going. It effected his vision more so at night time. He would bump into things, not look at us when we shouted him and stand in the wrong places for us to open doors. We really wanted to give him a better quality of life by giving him some vision back.

Our local vet couldn’t do anything with cataracts so we were referred to the Animal Health Trust near Newmarket. They were amazing. Thorough, precise and most of all caring. They all loved Snoopy. Everyone that comes into contact with Snoopy loves him. He is a happy, loving dog.

On our first visit we went to have some tests to see if it was possible to help Snoopy get some vision back. I knew the outcome of that visit would be a “Yes, we can remove the cataracts” or a “No, sorry there’s nothing we can do”. It was the latter. Snoopy has a hereditary eye disease. Which basically means over time his retina will just fail and he will be blind. The vet said they can remove the cataracts but you are only likely to give Snoopy 6 months of sight and the risks are great. He could get terrible infections and possibly lose the eyes. It seems selfish to put him through another operation for the sake of what could be a few months of vision. So we decided to see how things go and help him to adapt.

This week I had to take him back for a checkup. In the past 3 months little Snoops vision has got a lot worse. The vet described it as he can probably see shadows at best, almost like looking through a frosted window. She described the cataract symptoms as eventually Snoopy will only be able to see a bright light. He will not be able to make out anything else. The bad news is, this will happen quicker than we thought, within the next 6 months.

The eye disease on his retina means that as they start to fail Snoopy will go from seeing a bright light to complete darkness. Which fills me up with sadness. The poor little thing. He has been through the wars and to be left in complete darkness is just not fair. We are trying to do everything in our power to make him comfortable. This means changing our habits and being aware of his disabilities.

Things to do when you have a disabled dog

The first piece of advise the vet gave me was to get another dog, it will act as a guide dog for Snoopy. Voila, step in Rambo. We have noticed over the months that Snoopy follows Rambo by scent and proximity when they walk side by side. He often collides with Rambo as he is trying to follow along. One day Snoopy ran in the opposite direction to Hubby and he asked Rambo to get Snoopy. Whether this is coincidence or not, Rambo ran over to Snoopy (some 1/2 mile away) and sure enough Snoopy ran back with him. This is something we will try to train Rambo over the coming weeks, reward him for going to Snoopy for example to make sure he understands he is doing right.

Keep the bed in the same place. When I was tidying up the kitchen in preparation for a party, I moved Snoopy’s bed and put some chairs along the wall instead. Perfectly normal, usually. Snoopy didn’t understand what had happened. He tried to get under the chair and then when that failed he plonked himself on the kitchen floor looking rather fed up. He wanted his bed. He didn’t know where it had gone. But, more importantly, he knows where he is if he is in the bed. He can navigate from there. He has memorised our floor plan perfectly. Which leads me on to the next point…

Keep the furniture where it is. When I move things around, which I do quite often, well I used to. He walks into it. If a chair is left untucked from the table he will walk into it. So the way our furniture is now, it will remain to make it safer and less scary for Snoopy when his vision does completely go.

Using the senses he does have. Snoopy has a great sense of smell and he responds well to touch. So we use this to help him, treats in pockets when on a walk for example. I have started placing my hands on his shoulders and using pressure to steer him. This was helpful when we went to visit a friend and Snoopy had never been to the house. He was disoriented. I had to help him navigate around until he had sniffed everything, then he plonked himself in his bed and didn’t move. He spends a lot of time in his bed now, it’s his safe place I suppose.

Giving him plenty of hugs. This one goes without saying but we also snuggle with Snoopy. We are one of those families that lets the animals in the bedroom and this is Snoopy’s safe place at night. He sleeps at the end of my feet and doesn’t move until it’s daylight. 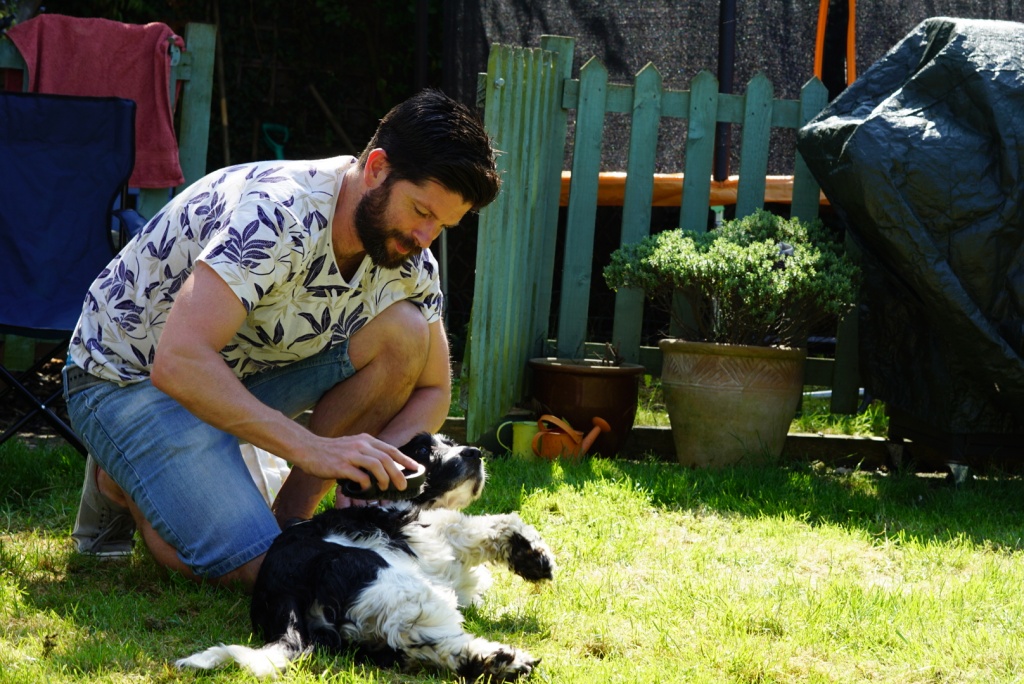 These are some useful tips we have picked up over the past 6 months. Hopefully they will come in handy if you have a dog that cannot see or hear. If you have any other tips I would love to hear about them in the comments below or on social media: @mummyconstant.

Bet you have never heard

Cruising into August with Carnival

An autumnal walk in the woods #CountryKids