100 16
Open
As part of our #LittleExplorers weekend in London,

We’ve had our fair share of illnesses this school term. It started with the good ole sickness bug and has just ended with both children having their turn with Chicken Pox. Both completely immobilising for quite different reasons. Before Noah had chicken pox I had absolutely no idea that you are prevented from flying. We booked our holiday to Greece 3 weeks before we left and Noah came down with Chicken Pox 7 days before we flew! We didn’t cancel our holiday, despite Noah having chicken pox beforehand, as you cannot be sure whether the sibling will get it. Our insurance wouldn’t have covered us if we had just made the decision to cancel. So our only option was to travel and have fingers crossed that Isla didn’t come down with it on holiday. If you have a similar situation to us, check with your insurance provider before travelling as your policy may well be different.

Thankfully I packed all of the medicines I had used for Noah to take abroad. This included: Calpol for the fever, Piriteze to help reduce the itching and a cooling gel to help with the itching in between Piriteze doses. I also didn’t forget the trusty talc. The Greek doctor that tended to Isla gave us some good advice too: get plenty of sea water on the spots and smother her in powder afterwards. Any kind of powder will do, so I was grateful that we had brought the talc.

I can honestly say that being abroad with a child that has chicken pox is quite stressful. Not only was Isla banished from the pools, she couldn’t eat in the restaurants. Our only options seemed to be sitting in the hotel room or venturing off the resort. This is because it is dangerous to be around pregnant women or patients who are having chemotherapy. Something else I didn’t know before Noah got his spots. We kept Isla close and didn’t let her interact with anyone else except us. We found a nice quiet beach and spent most of her contagious days there together. Sure enough the sea water did wonders as the blisters had all dried up by Monday evening, not even 72 hours after the spots broke out.

There are a few different rules to the contagious period that I have read and I had 3 different opinions given to me over Noah and Isla’s spout of chicken pox: from 3 different professionals no less. Noah’s English doctor said to wait until all the blisters had dried up and a period of 7 days and then she signed him fit to fly. Isla’s Greek doctor signed her as well after 4 days and fit to fly after 6 days. So no 7 day rule for the Greeks. Then the airline said the rules were 7 days after the last spots appeared, so potentially a 10 day period. Despite the fact she was no longer contagious!

What happens if your child cannot fly home as planned?

This I know well, as little Isla was not fit to fly when we should have come home on the Tuesday. The Greek doctor signed her fit to fly from Thursday. I had to cycle into Kos Town to get the doctors certificate. I needed this to show the insurance company and also so she could enjoy the last days in the pool. It was then left in the insurance company’s hands: they had to find us accommodation and flights back.

Originally the insurance company wanted to move us to another hotel, room only. It didn’t matter that our holiday was all inclusive, it also didn’t seem to matter that Isla is 5! I had to speak to the resort myself and organise for us to have an extension on the room, which I got. I had to pay an extra €81 for 3 nights. This meant we had the all inclusive, which was perfect as I knew we didn’t have to worry about food. We had the same room, so I knew we would be familiar and safe. We also had good tv channels and WiFi. Which I also knew would be good to entertain Isla.

The next hurdle was the insurance company telling us we had to split up, only one adult was allowed to stay with Isla. It’s a horrible situation to be in. Both parents want to ensure that both children are safe. It’s impossible to choose. In the end the children chose: Noah wanted Daddy and Isla wanted Mummy. So with that decided and the room extension sorted, we had to wave goodbye to half of the family. It was horrible. Isla sobbed her heart out when Daddy got on the coach, so did I. Noah was so excited, he waved us off and jumped on the coach with a bounce.

After we had Isla’s fit to fly letter, I had to show it to the resort so they would lift the ban on her using the facilities. I then had to send it to the insurance and they booked us a flight. Because we missed our original flight which included transfers to the airport, they arranged for a taxi to collect us. They also had to arrange a taxi from Gatwick to Cambridgeshire as our flight came in at the early hours of the morning. All we had to do was enjoy our last few days in Kos and try not to miss Daddy and Noah too much. 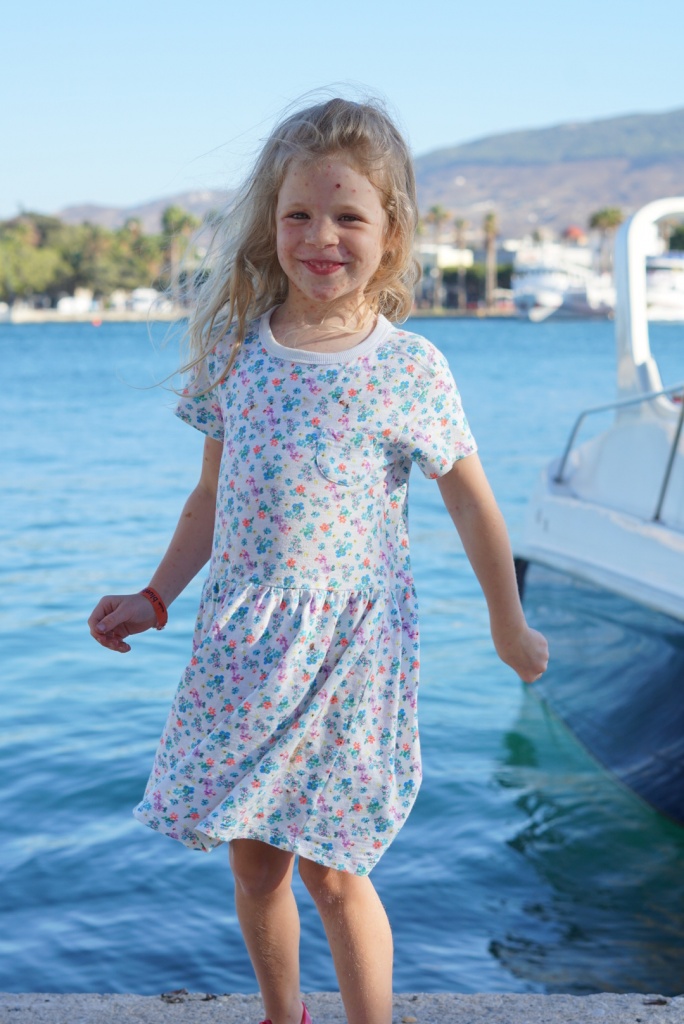 My ordeal boarding the plane in Greece

So, I had already been through the turmoil of saying goodbye to one half of the Constants, the days of sleepless nights whilst Isla got through the fever and itching stages and the stress of organising us both to get to the airport, in the right taxi! Oh and trying to stay in the same resort… when I checked in at the airport in Kos I discovered the insurance had booked us both aisle seats. You may think that’s not such a bad thing, but when you have a night flight with a 5 year old it is. She would want Mummy and she would want snuggles. Thankfully the check in staff kindly moved us so that we could sit together. I was so grateful. Another little bit of anxiety out of the way.

Next came boarding the plane. Our new seats were in row 1. Right in the front, by the air stewards. Guess what? 5 Minutes before taking off the head stewardess notices Isla’s scabs. Which she only had a couple of at this point (thank you sea salt). The next few minutes felt like hours! “Has she recently had chicken pox?” Came the question. I said yes as I can’t lie. “When did she get her last spots?” Whattttttttt! That was probably Sunday. As you can imagine the panic kicked in about now. I took the doctors letter out of my hand luggage and handed it to her, explained that she is not contagious and fit to fly. The airline policy is that a patient is fit to fly 7 days after the last spots appeared. “I’ll have to check with the captain.” Off she disappeared into the cockpit with our doctors letter.

At this point, I was frantically texting hubby and wondering what on Earth would happen if we had to get off of the plane. We had no transport, nowhere to stay and nothing to eat! She came back after a few moments and said to me “tell me that she had her last spots 7 days ago”. So I did. She smiled. I actually cried.

The immediate stress and anxiety that situation put me under, overwhelmed me enough to make me instantly cry. Ridiculous. I felt so silly. Isla got some free Percy Pigs out of it and thankfully the plane took off moments later. Although I wasn’t too grateful as when we came into Gatwick the plane was all over the place due to the winds. The cabin crew stopped service 30 minutes before we landed due to the bad turbulence.

Once we got to Gatwick, I had fun carrying a sleeping child, 2 rucksacks and manoeuvring 2 heavy suitcases. That place has never felt so huge than it did at 1am. I was grateful for the buggy, at least I could put Isla in that with the rucksacks for some of the way. The taxi was waiting for us with a big sign saying “Miss Isla Rae Constant”. 2 hours later we got home. Safe and sound. 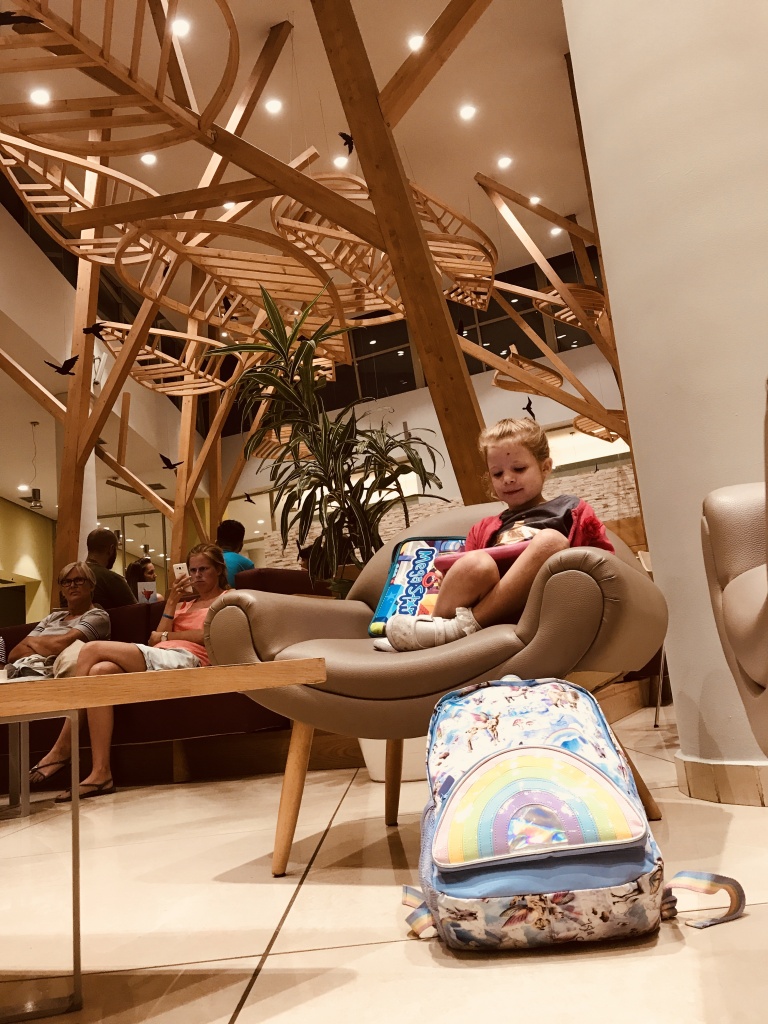 What to do when injured on holiday