It is fair to say that I would have been a lot worse off this Summer if it wasn’t for Anthisan. There have been bugs everywhere, in the height of the heat I had to keep windows closed to stop them from coming into the house. Three times I had to get antibiotics from the doctors because I react badly to mosquito bites. I went through 3 tubes of this wizardry magic, Anthisan, it soothes and reduces the itching for quite a long time.

Getting outside should not be a problem, it’s not nice hearing the children say they do not want to play outside because of bugs. Noah and Isla both had quite a few bites on them over the holidays and Daddy was also stung by a wasp. It’s been an eventful time for bites and outdoor play.

So, I wanted to inspire the children to get outside, no matter what bugs were around us and to embrace the great outdoors and not to worry. It was easier said than done but we got there in the end. Now that school is back, it is even more important to get some outdoor time, all the wet weather has made the mosquitos come back though!

Here are some of the things we do to get our half an hour of fresh air a day:

I am one of these people that when I am afraid of something, I read up on it. I learn all that I can about that particular thing. It helps me to not be so afraid. So I tried this with the children. We got out big Bug Encyclopaedia out and looked through it, gasping and grimacing at all of the bugs inside. It was fun. It also inspired the children to look for the bugs around the garden and when we go out for walks. Isla found a yellow ladybird that she wanted to try and find.

Using magnifying glasses, nets and a bug catcher is a great way to inspire little scientists. They really wanted to find as many bugs as possible to put in the bug catcher. We nearly got a bee, which would not have been a good idea. I explained that we need to look after bees. We planted wild flowers, buddleia and lavender in our garden to encourage the bees to come. We also have a Californian Lilac, which around May time hums with the buzz from all the bees. It’s a lovely sound. 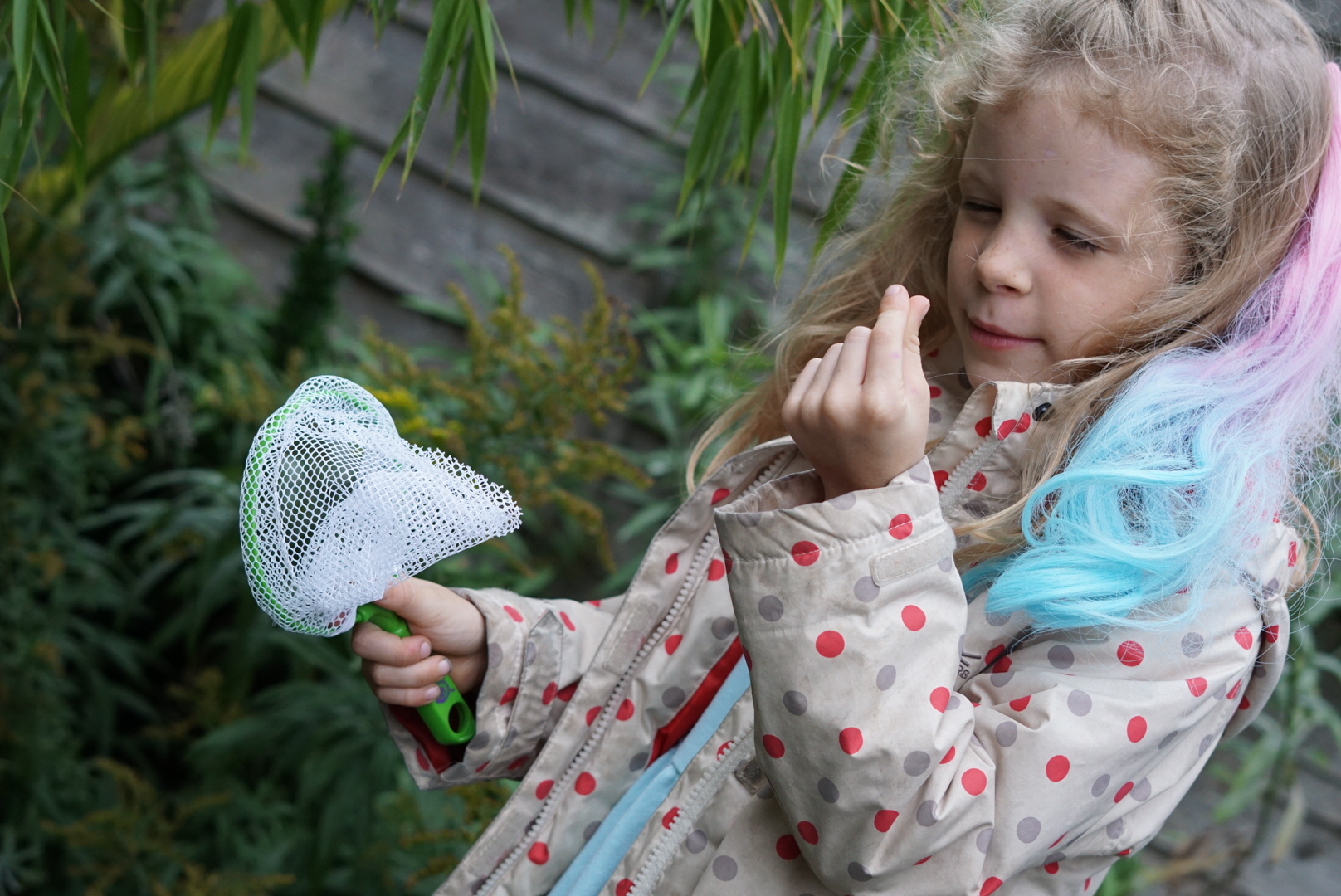 I have found that another way to inspire the children to get outside is to get them to guess how many steps we will do. Whoever gets closest to the right amount, wins. Obviously no one ever loses. But my watch tracks our steps and we monitor it on all of our lovely walks. We have been exploring National Trust locations recently as we renewed our membership. It’s so nice to be able to go out and enjoy these places without worrying about bug bites! 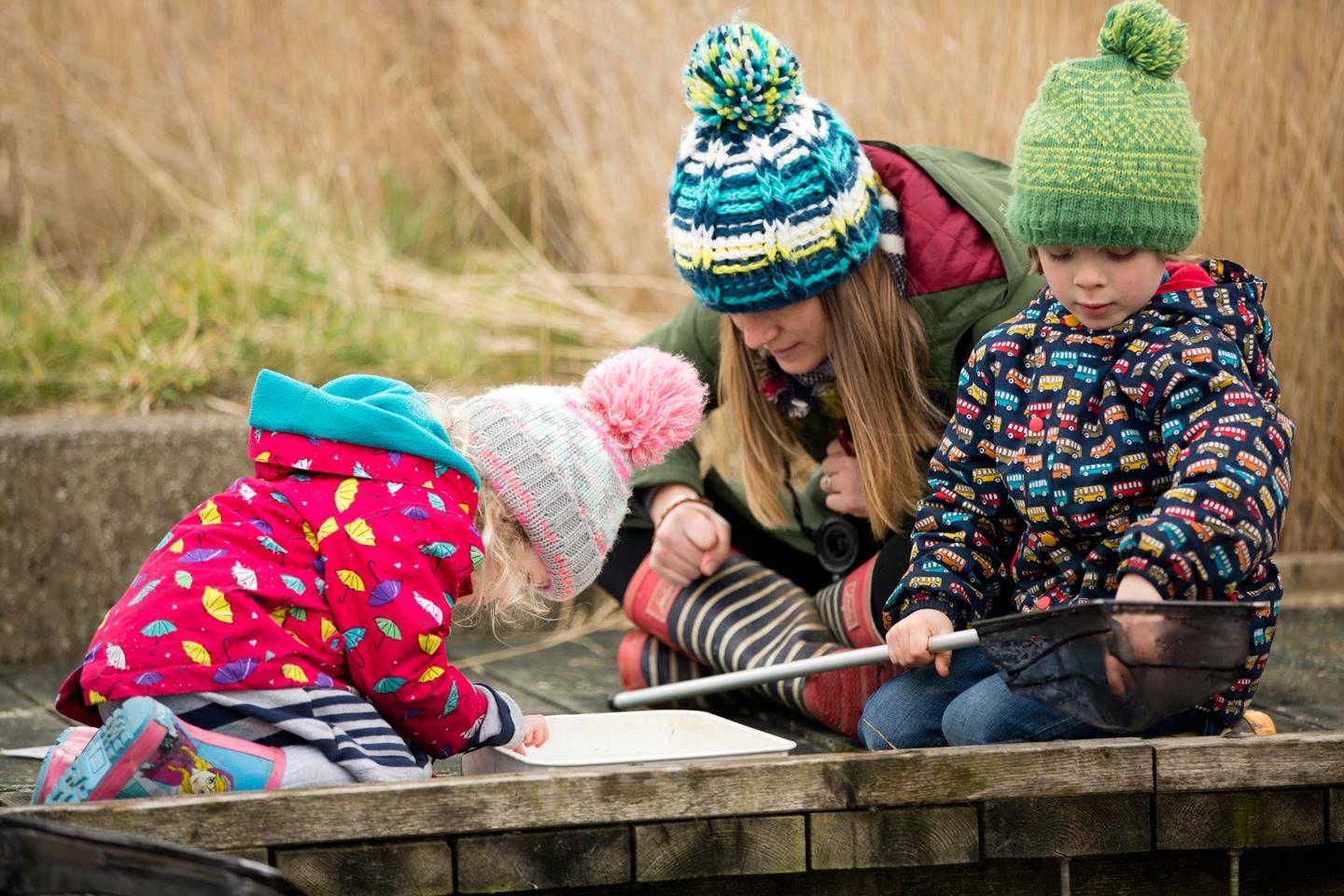 There’s nothing better than imaginative play. I think. I used to love playing make believe when I was a child. Always picturing a magical land around me, like the start of Labyrinth when Sarah is twirling around the park in her own little world. I love that movie. I try to encourage that type of play with the kiddies too, we make camps in the trampoline or play schools, or set up pretend camp fires and pretend we are on holiday.

Do you have any fun ideas to get the children outside and enjoying the great outdoors, I would love to hear them in the comments below or on social media: @mummyconstant.

8 Reasons why you should celebrate your 50th

2 Top tips for a break in the UK

Why Vitamin N leads to a healthy childhood

Having fun in muddy puddles

Tips for having fun with your fellow mums

A magical Shrek’s Adventure this Christmas

8 Reasons why you should celebrate your 50th