View
493 36
Open
Today was chilled and productive, which is always

View
510 32
Open
These guys have grown up so much during lockdown.

Yesterday Noah and Isla had the absolute pleasure of visiting Build a Bear Workshop in Milton Keynes, I think I was excited as them. We discussed which bears we were going to choose before hand and what outfits we were going to put on them – nothing prepared us for the choice and array of clothes though. Isla was in her element… 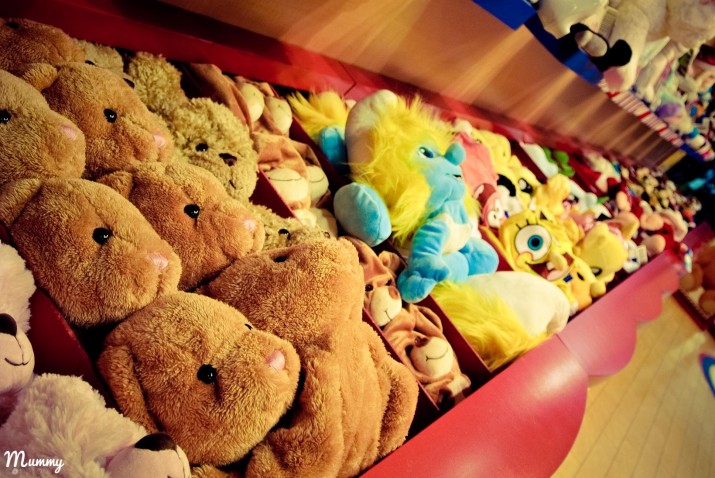 It was something that I was a little nervous about as Noah can be quite temperamental in certain situations and somewhere like this I knew it would test him, he is very quick to become overwhelmed and he wants to be naughty – or will not want to participate. We did get a bit of this behaviour for the first few minutes, but then he soon settled down and really enjoyed himself. After choosing our bears: Noah chose a monkey and Isla chose the Hello Kitty of course. We went over to feel the heartbeats, smell the magnificent scents that you can put inside your bears and listened to all of the great sounds that you can put in your bears. Noah and Isla went for sounds only, Noah chose the monkey noise and Isla chose the lady voice that asks for cuddles and your name (very Isla). 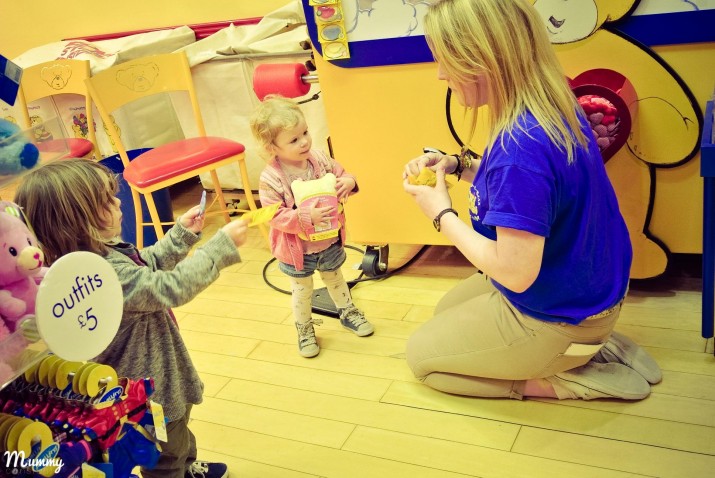 It was lovely to see them both engaged and Noah thoroughly enjoyed making the monkey and kitty for his little sister. Alice, our build a bear assistant, made sure that Noah put his all into making “Mr Monkey” and she asked him to take the heart which goes into every bear and he had to: rub it to keep monkey warm, press it against Noah’s heart so he feels Noah’s love, rub it on his ears so monkey can hear and the same with Noah’s nose so monkey can smell. Then finally he had to give it a big kiss and turn around – he did all of this with his best efforts, it was like he really cared about Mr Monkey. 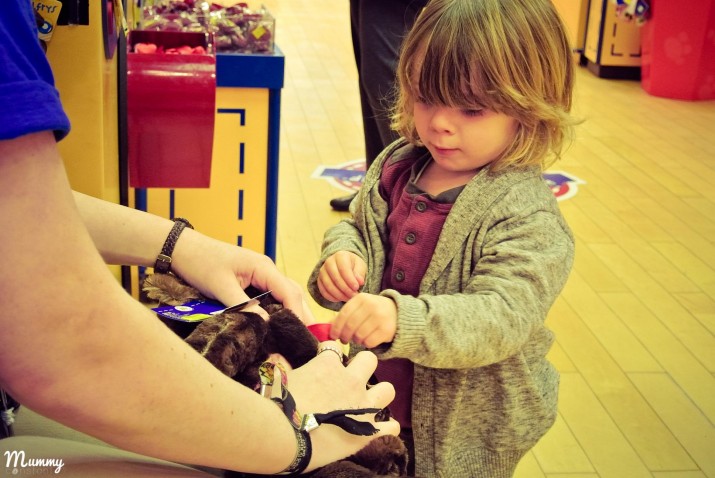 He was very proud of his job of pumping up the bears, you could see it in his concentration that he was going to do this right and be a good boy. He was amazed that monkey grew and so did kitty, he kept giggling away at the process. It was nice to see him so happy, it was magical. 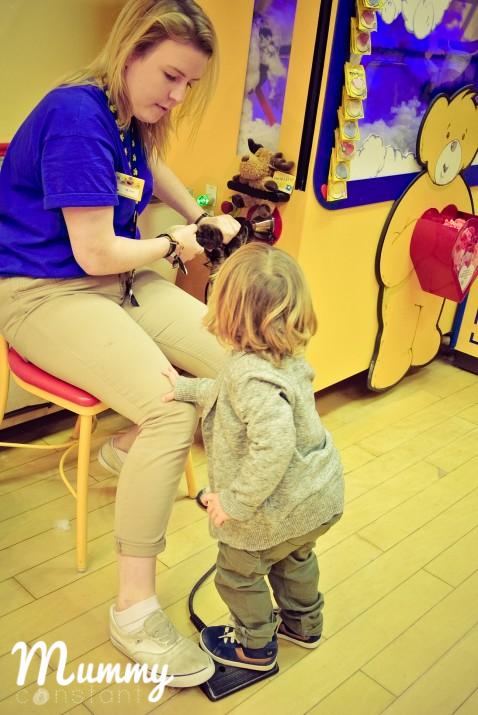 After they stuffed the bears Isla wanted to go on the computer, so Noah joined her and Alice helped them do their birth certificates for Mr Monkey and Kitty. Alice had to do it pretty quick as they were both trying to help her, it was quite funny seeing their little fingers pressing all of the keys. 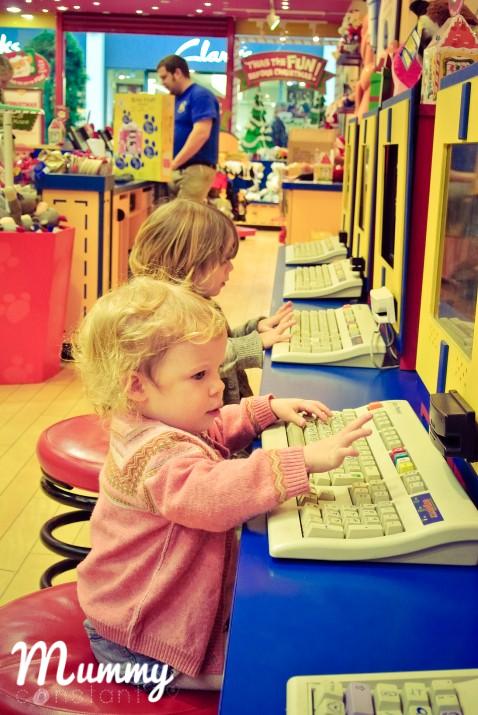 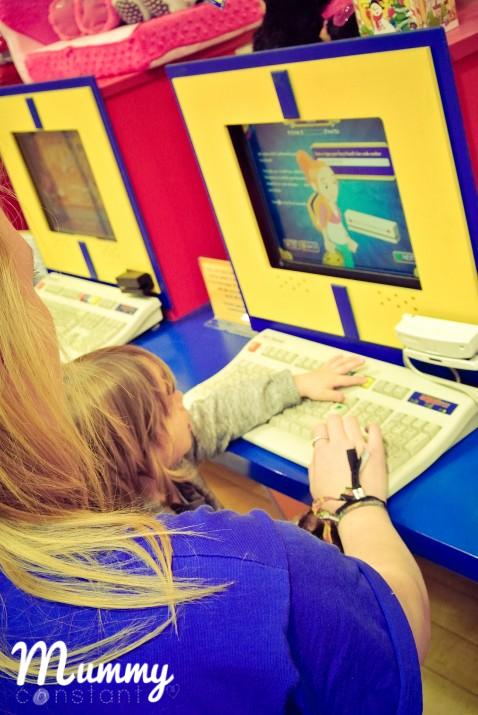 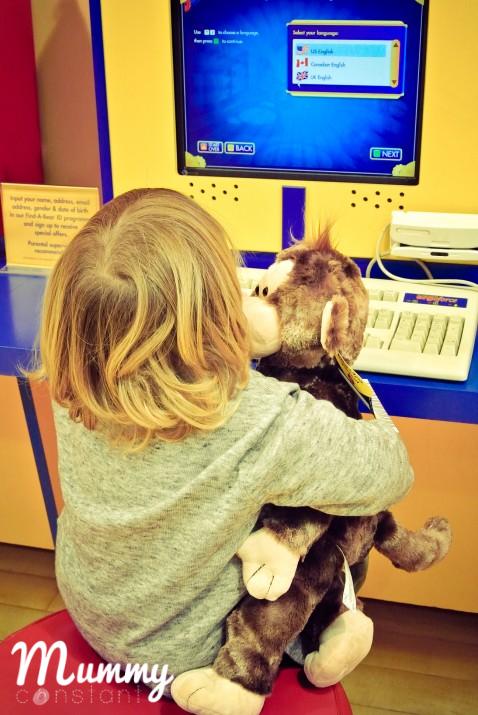 After they did their certificates Alice took Noah to the monkey clothing section where he chose what Mr Monkey was going to wear, Noah wanted big boy pants for monkey and he came back with some cool pants and a rather funky hat! Mr Monkey is a cool monkey… 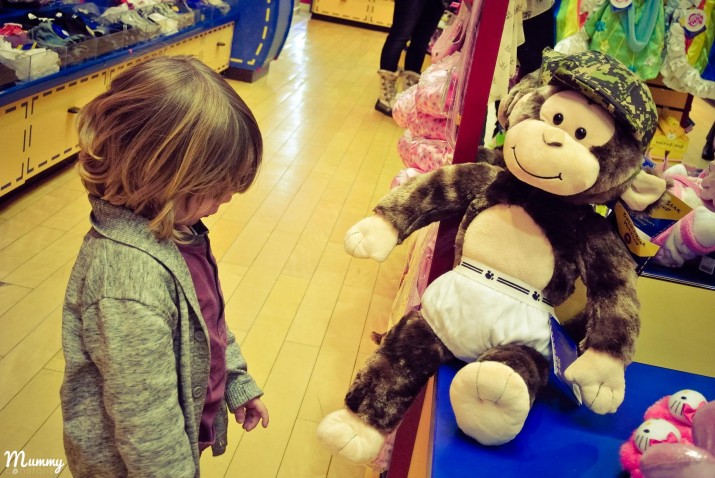 Isla was drawn to the Hello Kitty clothes and so we got a dressing gown, some knickers and matching slippers for Kitty – she can really be a Hello Kitty kitty now! 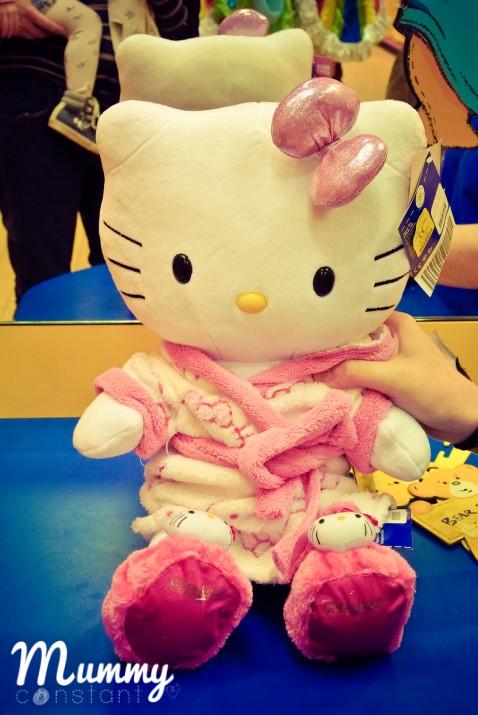 So now both tots had their bears stuffed, dressed and certificates ready and waiting – there was only one more thing left to do: wash and brush the bears ready to take home. Such an adorable idea and little Noah & Isla loved cleaning the bears up. There is a hair dryer which blows down onto the bears and 2 little brushes especially for little hands to brush the bears until they are nice and clean. I love how things like this are real for toddlers and small children, I wish I could get away with doing it! Mummy wanted the purple unicorn 🙂 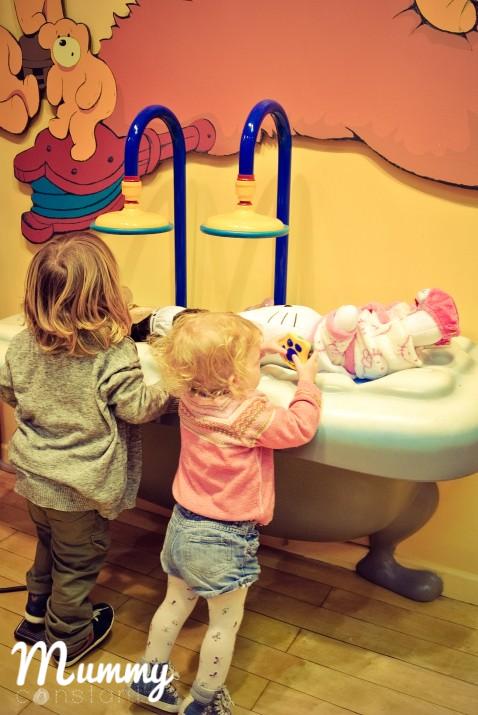 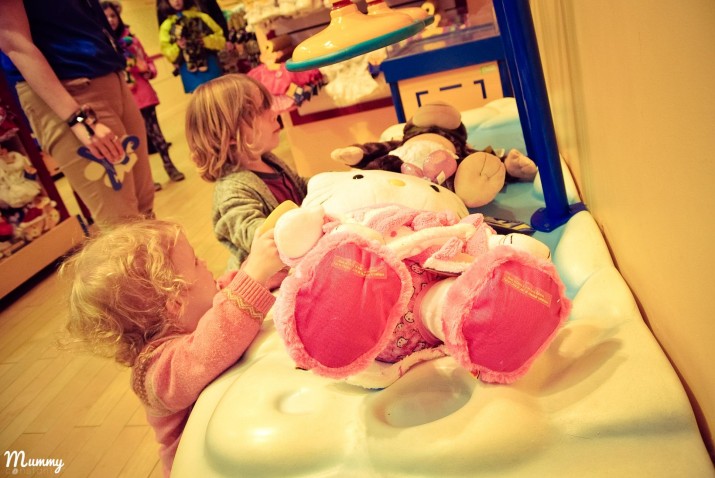 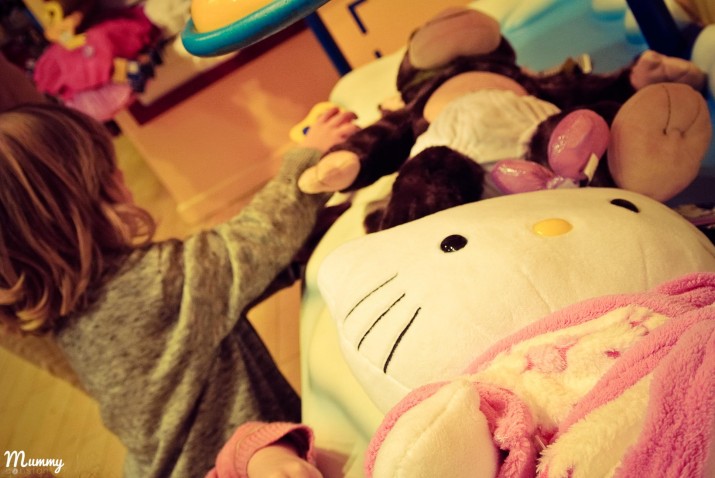 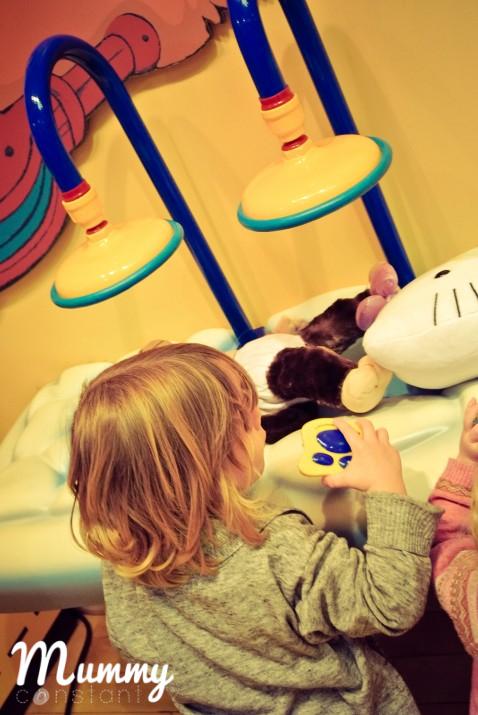 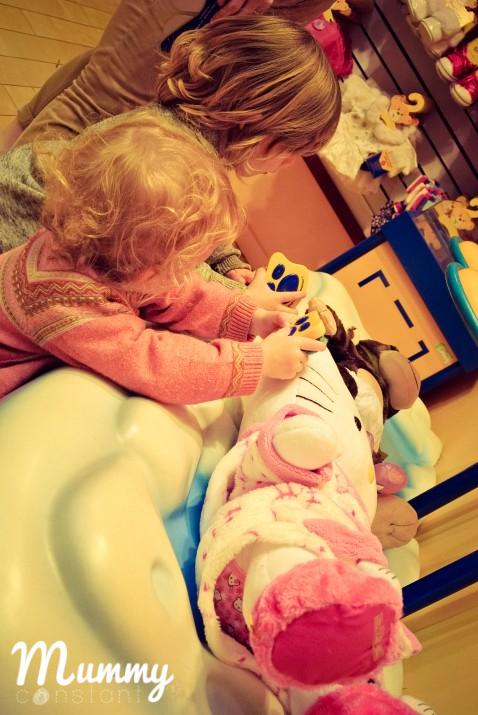 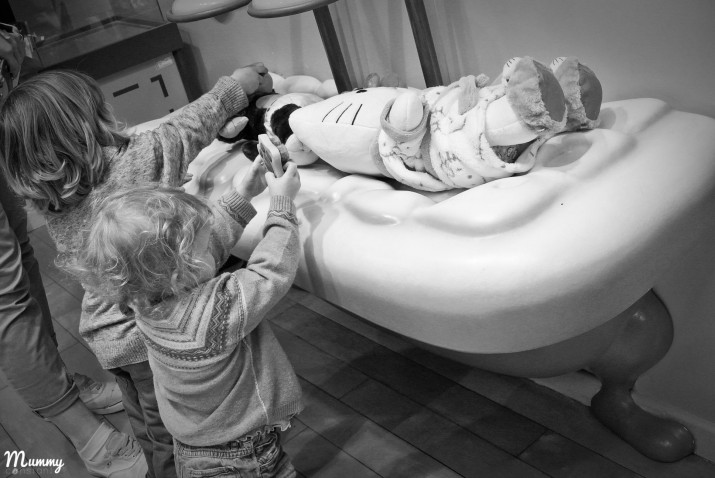 After the bears were all cleaned up, dressed and ready to go home we took them to the till where they got put in their very special carry homes. Noah helped Alice put Mr Monkey and his certificate into the box and Alice showed him how to do it up. He was watching every thing she did, so that he knew how to do it too. When monkey was in the box, he was looking for him through the window – Noah said Mr Monkey is his best friend. It was so cute. 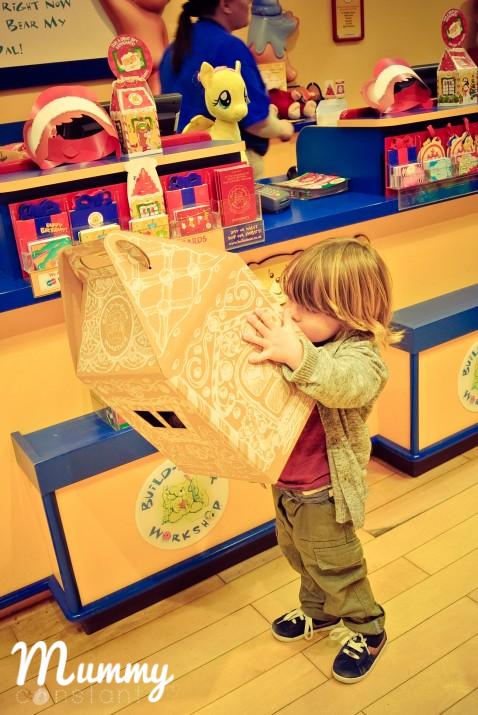 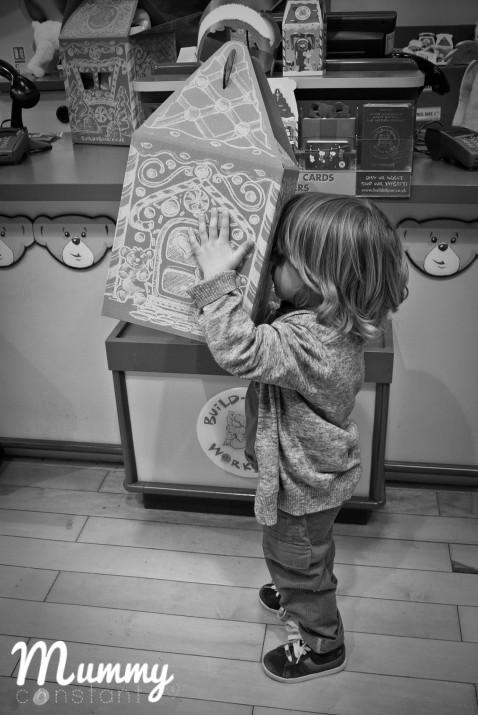 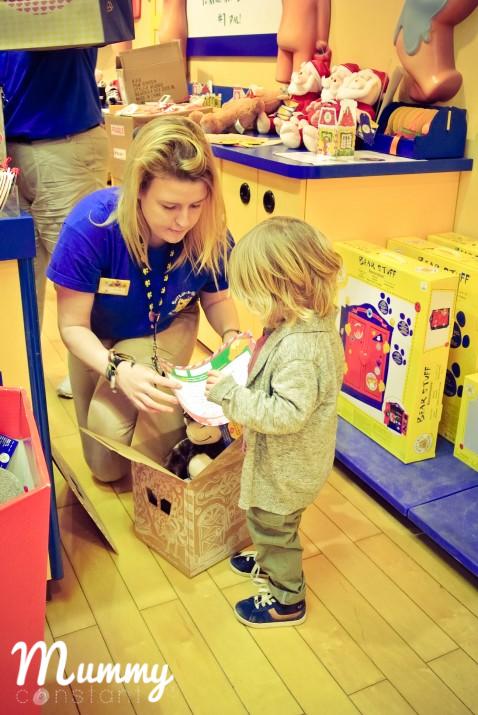 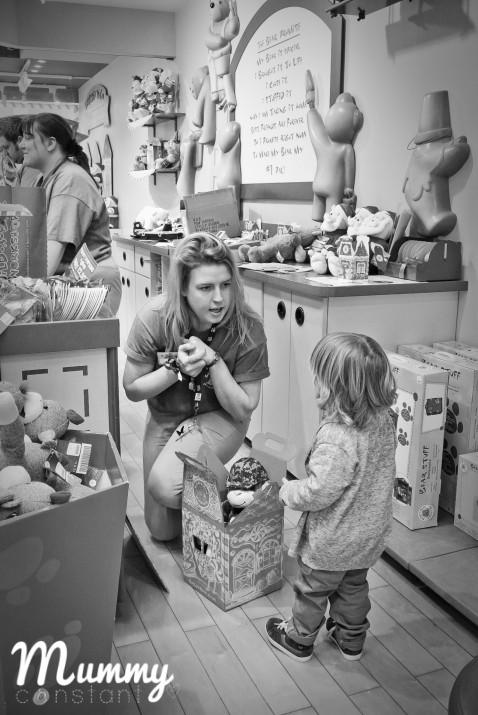 Alice gave the little ones some build-a-bear stickers which Noah sat contently sticking to Mr Monkey’s carry home. He thoroughly enjoyed his experience at build-a-bear today and although Isla was too little to take part in all of the experience, I think she thought it was all real too. Just like Noah did. With that Noah took his Mr Monkey in the carry home and carted him all the way to the car, he didn’t want to let him go and he was so happy. He thought it was brilliant that Mr Monkey had a little carry home. 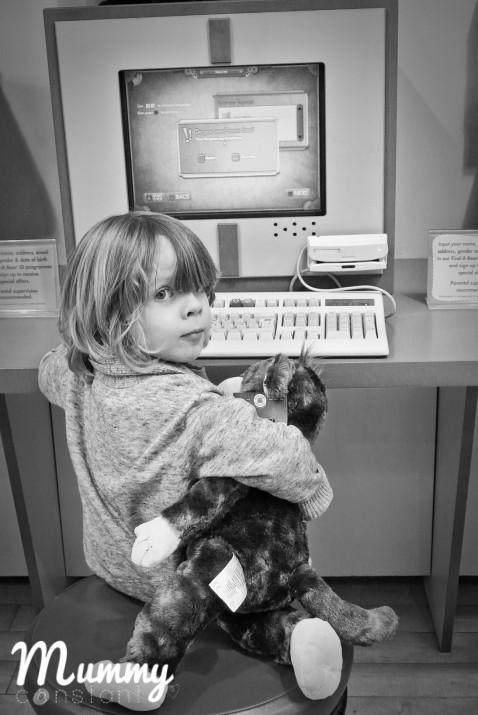 He told everyone about it for the rest of the day and he took Mr Monkey to bed last night. I had to give him a drink, read them both a story to bed and tuck them both in! He really is Noah’s best friend. I think this is a start of a beautiful friendship…

You can buy a huge selection of bears from the build-a-bear workshops and you can see all the build-a-bear stores on the website. They sell other products, other than the main bears too, which you can also buy outfits for and there are many accessories to glam up your bears. This is the one that Mummy wants: Twilight Sparkle, yes I know I am 30 not 3 – but it was very cute! You can like them on Facebook: https://www.facebook.com/Buildabear and follow them on Twitter: @buildabear. Make sure you get to your nearest store before Christmas… it will be the best Christmas present they have ever had.

Staying in the black this New Year

Tips on maintaining good dental health for your dog

Join in with #Doctober this week!

What I learnt on the speed awareness course

How well do you know your cat?